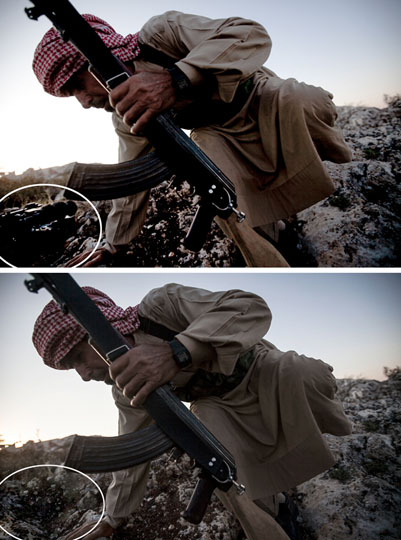 In a photo taken, Sunday, Sept. 29, 2013, a Syrian opposition fighter takes cover during an exchange of fire with government forces in Telata village, a frontline located at the top of a mountain in the Idlib province countryside of Syria. In the original image (top photo), a fellow journalist’s video camera is visible on the ground in the left corner of the frame. Freelance photographer Narciso Contreras altered the image (lower photo) by “cloning” other pieces of the background and pasting them over the camera, before sending it to an AP photo desk. The Associated Press has severed ties with the freelance photographer, who it says violated its ethical standards by altering the photo. (AP Photo/Narciso Contreras)

This website uses cookies to improve your experience while you navigate through the website. Out of these, the cookies that are categorized as necessary are stored on your browser as they are essential for the working of basic functionalities of the website. We also use third-party cookies that help us analyze and understand how you use this website. These cookies will be stored in your browser only with your consent. You also have the option to opt-out of these cookies. But opting out of some of these cookies may affect your browsing experience.
Necessary Sempre abilitato
Necessary cookies are absolutely essential for the website to function properly. This category only includes cookies that ensures basic functionalities and security features of the website. These cookies do not store any personal information.
Non-necessary
Any cookies that may not be particularly necessary for the website to function and is used specifically to collect user personal data via analytics, ads, other embedded contents are termed as non-necessary cookies. It is mandatory to procure user consent prior to running these cookies on your website.
ACCETTA E SALVA